The lats are a large muscle which cover a large portion of the back. Utilizing Lat Pull Downs is a great way for an athlete to improve the strength of their lats and back which will in turn increase strength in the chest, shoulders, and arms. Although the strengthening of the lats can help increase the overall strength of many other muscle groups the lats main function is to assist athletes in pulling motions. Increasing strength in the lat area is critical for any athlete to have continued success at a high level. Utilizing Lat Pull Downs or any other pulling motion will help to strengthen these muscles and improve overall athletic strength.

Once athletes have decided to use the wrist strap or handle athletes will need to decide on a correct amount of resistance to use during the Lat Pull Down Drill. The KB Powerbands offer a wide arrange of resistance bands which can be utilized individually or paired with another resistance band to increase resistance. If athletes can easily complete all repetitions and sets of the lat strengthening drill then resistance should be increased to further challenge the athlete. If athletes are over rotating the hips, sticking the butt up in the air, or constantly changing foot positions to complete reps early in the exercise the resistance should be taken down to a more manageable amount. Something to keep in mind when determining correct resistance is if the athlete can complete two more repetitions than required for two straight sets, then the resistance should be increased. 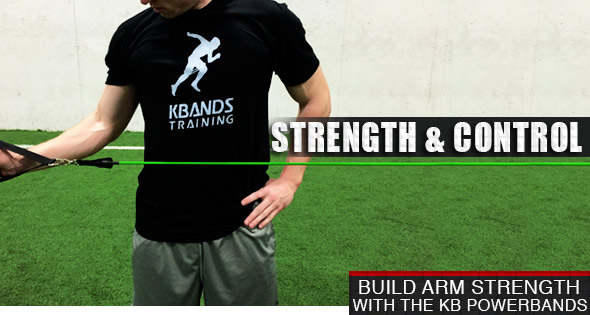 Athletes will perform the Lat Pull Down exercise for 30-40 seconds per arm for 4-6 sets allowing at least 2 minutes of recovery between sets. Since this exercise is timed athletes should not think about the amount of reps which are being performed, but instead on the quality of the repetitions and the amount of time the athlete is able to maintain tension on the lat and abdominal muscles. Taking the arm through a long controlled motion, athletes will be able to increase a fitness concept known as time under tension. This idea states that the longer the athlete is able to keep the muscle under tension the more muscle fibers must be activated in the muscle to compensate for the extended tension. Giving the arm even a brief break will allow the muscles to regroup and a smaller portion of the muscle will be utilized to complete the movement. However, since more tension is being placed on the muscle during the Lat Pull Down athletes will need to take longer breaks to allow the muscle to recover. Athletes should not rush back into the Lat Pull Down Drill, but should instead take the entire 2 minutes to recover so the Lat Pull Down Drill can be performed at full strength. The goal of this drill is to add strength. Rushing through the rest periods, or not taking full advantage of them, will be counterproductive to the Lat Pull Down Drills ultimate goal of adding strength to the lats and core.

Although this drill focuses on the back adding the plank while performing this pulling movement will benefit many other muscles groups of the body. This full body lift forces the entire body to work together as one unit to complete. This adds additional strength to the shoulder, arms, and chest while increasing body control. Additional core strength also helps to keep the body rigid during exercise with heavy loads or exercises requiring good body position to complete, such as plyometrics. Full body control, upper body strength, and additional core strength will also aid athletes as they begin to work through running or jumping drills which require the upper body to aid in moving and controlling the body.

Since a large portion of the bodies muscles are utilized in the Lat Pull Down exercise athletes will need to ensure the entire body is stretched and prepared to perform the back strengthening drill. Head to the training section and check out stretches for the shoulders, arms, and chest. These stretches can be completed before and after the Lat Pull Down Drill.