‏Jump rope benefits which are specific to athletes include increased vertical jumping, increase speed and agility, along with foot speed. Although some of these jump rope benefits were briefly discussed in the previous section this portion will focus on how the Kbands Speed Jump Rope can actively enhance athletes athletic output by strengthening the bodies natural producer of powerful and explosive movements.

‏The mechanism inside athletes bodies which produces power (combination of speed and strength) and explosive movements during athletic movements in known as the stretch shortening cycle. One of the jump rope benefits from performing jump rope workout routines is the intense training and optimization of power in the human body. This explosive response is produced by energy being stored in the calves and quadriceps then rapidly being released during explosive movements like jumping or running. We will use jumping as an example of how the stretch shortening cycle works. When a basketball player is running down the court and goes directly from his run into a jump he is using his forward momentum, from the running movement, and transferring that energy into the muscles of his calves and thighs. This energy dissipates very quickly which is why it is only effective for quick movements. As the athlete jumps into the air the stored energy in the legs and thighs is quickly released allowing for more energy to be used to power the athlete into the air.

‏One way athletes and coaches can increase the stretch shortening cycles energy output is by actively increasing the storage capacity of the muscles responsible for holding and releasing the quick bursts of energy. A proper jump rope workout routine allows the legs and thighs to rapidly go through the stretch shortening cycle, training the body to strengthen and store more energy in these muscles resulting in greater athletic output from athletes. 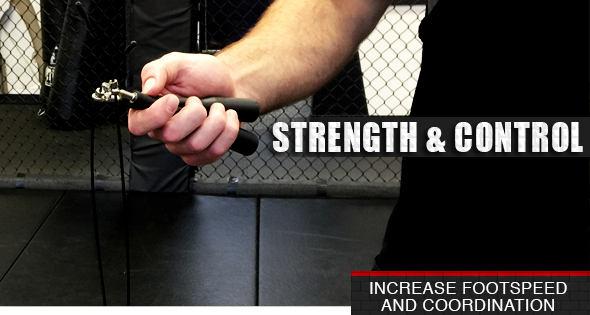 ‏The 4x60 Jump Rope Workout Routine is a simple drill for athletes and coaches to set up requiring a Kbands Speed Jump Rope and enough space for athletes to comfortably jump rope without running into walls or other athletes.