Lateral power and speed are extremely important when playing hockey. Hockey is a sport that forces the player to push off one leg at a time and hockey conditioning off the ice should mimic this movement. The right muscle activation and increased speed can be gained using Kbands Resistance Bands with this hockey conditioning drill. Hockey requires explosive lateral movement and powerful leg muscles; specifically the hip flexors, abductors, and glutes.

Core stability is also vital for keeping the body moving forward. A weak core can result in weak movement because all movement originates from the core. This hockey conditioning drill is going to target the muscles of the legs and core.

Conditioning the leg and hip muscles is vital for speed on ice. For this drill utilize the Kbands Leg Resistance Bands for more activation in the hips during lateral movements. There is some set up for this particular hockey conditioning drill. Begin by making sure there is plenty of space and set up a board or bench at an incline on a step or wall. Start a couple yards away from the incline, sure that the Kbands Resistance Bands are strapped in place, comfortably above the knee joint with the proper resistance.

Begin hockey conditioning away from the incline in a deep lunge position; the knee farthest from the incline is bent. Explode out of the lunge in a lateral shuffle motion. The resistance of the Kbands will be intense, work through the resistance to maintain proper alignment of the knees, not turning the knee joint inward. Utilize the power of the glutes and hips to propel the body, all the while working through the resistance of the Kbands to activate the muscle even more deeply. After exploding out of the lunge position and shuffling quickly to the incline, place the foot on the incline and then explode laterally, shuffling back to the starting point, lunge again and repeat this entire movement for a dynamic and powerful hockey condition drill. This hockey condition drill will allow players to increase skating stride speed on the ice by increasing hip and leg strength.

It is particularly important for safety and muscle activation to keep the knees from moving inward. The Kbands Leg Resistance Bands are designed to force the user to activate the glutes in order to prevent inward rotation of the knee joint. This is increase muscle activation and therefore the power of that lateral movement.
Go in and out for 6 repetitions and then turn around to perform 6 reps with the opposite leg leading. 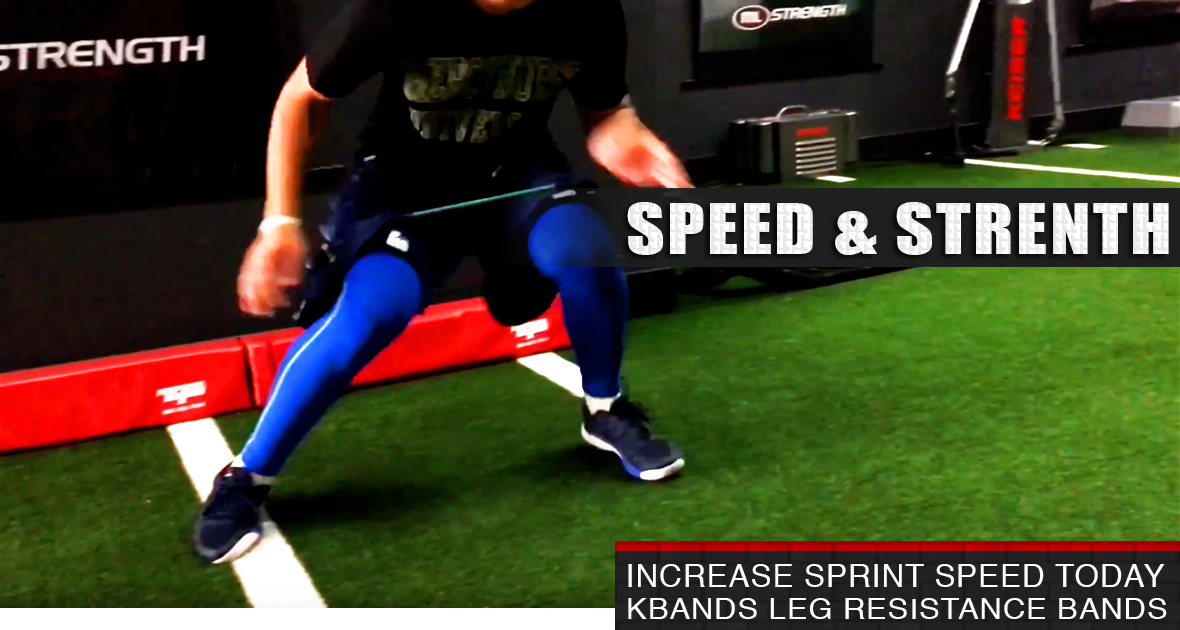 Lateral movement in hockey is key to quickly skating speed on the ice and powering the puck down the ice. Speed is another important factor in this hockey condition drill.

Perform the same hockey conditioning drill as above; two times in and out, after the second shuffle back to the lunge position, explode forward for a ten-yard sprint. Sprint the ten yards down and ten yards back. Power and drive the knees forward through the resistance of the Kbands to really target the hip flexors, glutes, and core muscles. This hockey drill will not only allow hockey players to excel on the ice but also build up the joints in order to prevent injury and keep them on the ice even longer.

The added resistance of the Kbands is what set this hockey condition drill apart from any other. Kbands also cause the user to more deeply activate core muscles in order to drive the knees up and forward. Hockey conditioning should always include core work because a strong core equals stability and balance on the ice. This hockey drill with Kbands Resistance bands mimics the resistance of the ice, building strength and preparing the body for powerful and quick lateral movements.

It is always important after any hockey condition drill to bring the heart rate down and stretch while the muscles are warm. The Kbands Recovery Foam Roller is a great tool for getting kinks out of the muscles and is designed to increase blood flow to the muscle for a more efficient and quick recovery. By stretching and utilizing tools to aid the muscle in recovery, players can prevent injury and get back on the ice more quickly. With muscles that are stable and ready to perform at their highest capacity, hockey conditioning is even more effective for building strength. Make sure after any hockey conditioning drill to rehydrate with water and electrolytes.