As basketball teams work to elevate their game and take control of the court, one of the fastest routes to success will come through increasing foot speed on the defense. Fast feet and high agility during defensive maneuvering can help any team step around the opponent’s offensive strategy. And as they develop these skills, players can benefit from foot work drills and basketball speed drills like this one, called the triangle drop step.

The triangle formation of the cones during this drill can help players work on their forward, backward and lateral quickness at the same time, and can also help teams work on quick stops, explosive starts, and controlled direction changes on the court. With the additional pressure of the Kbands, players can also develop speed by increasing strength in the hip flexors and the muscles of legs and core. After several reps of the drill, or several weeks of regular training with drills like this one worked into the program, players will feel lighter, faster, and better balanced when the bands are absent.

This triangle drop step basketball speed drill can also help basketball players work on their passing skills. The drill involves multiple high speed chest passes and gives players a chance to receive and send back passes while also concentrating on footwork. Players and coaches can complete the simple set up and then follow along with the video, eventually working this exercise into a regular training regimen.

This basketball defensive drill will require very little equipment and a quick set up. Coaches and basketball players will need only three speed and agility cones, a pair of Kbands resistance training bands of reach player (both of these items can be purchased through Kbands Training.com), and a ball.

The cones can be set up on the court in a triangle formation about six feet apart, and after the participants have stretched and warmed up, they can attach the Kband straps to their upper legs and then clip the resistance bands to the straps.

At the starting signal, the basketball player will sprint laterally from one of the two front corner cones to the other. At each cone, the player will receive a fast a chest pass from a coach or partner and then will return the pass before sprinting back to the other corner cone. After landing and returning the pass at each of the two corners, the player will drop back, sprint to the third cone, and then sprint back to the front cones and receive another pass. The pass will be delivered only while the player is arriving at one of the front corner cones.

Since this is not specifically designed as a conditioning drill, basketball players and coaches should not be concentrating on endurance, and should not be focused on sustaining an elevated heart rate. Unlike a conditioning drill, which typically keeps a player in motion for a full 30 seconds, this sprinting drill should last for only about 15 seconds max before players stop and rest. Keeping the drill short will keep the focus on explosivity and control. Whether they’re completing the drill individually or in teams, players should complete at least six to eight resisted reps of 15 to 20 seconds each. After these reps, players can pause for a moment and allow the leg muscles to cool down for a rest period of about two to five minutes. Then they can unclip the bands, shake out the legs, and complete two to four more reps with the resistance bands removed. 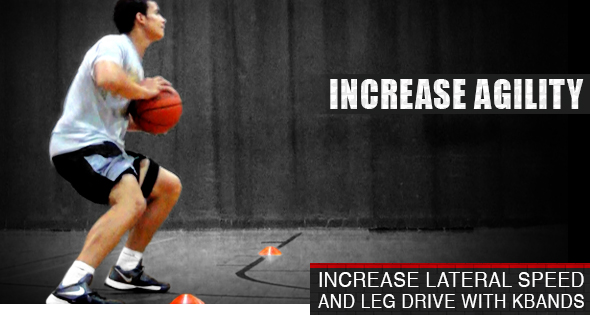 During the first round of resisted sets, players should work on keeping the body aligned and the feet moving as fast as possible. The chest should stay squarely positioned, facing the offensive player or partner delivering the pass. And while the chest stays square, the body position and center of gravity should stay low. This low position will help player stay in balance as they change direction and move rapidly from one position to the next.

At each corner, the player will receive the pass, send it back, and then move into the drop step and sprint laterally back to the third cone. At the moment of direction change, the foot should come back for the drop step and the hips should open up. But the player’s attention and focus should stay forward.

During the unresisted sets, players should still continue to concentrate on body position during the lateral move and the drop step, but they should also invest energy and attention in foot speed. The temporary feeling of lightness that happens after the bands are removed can be leveraged in a way that helps players develop fast feet and lighter feeling in the hips and lower body.

As mentioned above, the triangle drop step drill should involve six to eight reps with the bands in place, each one about 15 seconds long, with a brief break between each rep so the focus can stay on speed, not conditioning. The resisted reps should be followed by a two minute break, and then two to four more reps with the resistance bands removed.

This basketball defensive drill can be worked into a regular training program two or three times per week, and after a few sessions, players will start seeing improvements in speed and footwork during defensive game situations.

For additional defensive and offensive drills similar to this one, basketball players and coaches can visit the basketball training section of Kbands Training. com. The site also offers sport specific training drills for baseball, football, lacrosse, track and field, and a growing list of other sports as well. Visitors can also check out the site for more detail about the training benefits of the Kbands and related resistance and suspension training equipment like the KB Powerbands and KB Duo.