The 3 Cone Drill is used every year to test football players at the NFL Combine. Players who come to the NFL Combine out of shape and have slow times find themselves lower on the draft sheets. It is important when football players train to be better athletes that they work to decrease their times in every football drill offered at the Combine. Football players athleticism is tested by their times, not just their season stats. The 3 Cone Drill is great for testing agility and explosiveness out of the three-point stance. Watch the video below, and learn the techniques that can help lower your 3 Cone Drill times.

The 3 Cone Drill is easy to set up. Football players must grab 3 cones. Set the first cone down and walk in a straight line for 5 yards to set the second cone down. Now the football player must take a 90° turn to the right or left and place the third cone 5 yards from the 2nd cone. If the football player is standing at the first cone he should see the cones in the shape of an L. It is important that football players train with the third cone on both the right and left sides. Working only one direction will hinder the bodies opposite muscle groups from gaining the same training benefits. Complete reps on both sides to make an overall better trained football athlete.

When football players are working to decrease their times in the 3 Cone Drill it is important to work on body position at the turns. During the first two turns the athlete is combining a forward sprint with a lateral turn. Notice in the video above that the football player touches the cone with the same hand as the lead foot. Football player's
times will be slower if they move past the cone and touch with their trailing arm. Let's say cone 3 is to the left of cone 1 at the starting position. The football player will leave the three-point stance from cone 1 approaching cone 2. As the football player reaches cone 2, he must lower his center of gravity, and touch the line right in front of his right foot. Next the football player must shift his weight back to his left foot and begin gaining ground towards cone 1. On the turn, the left foot does not take a step first, it simply takes the weight shift and drives off the ground leaving the right leg to take the first step. The same sequence of events happens at any lateral turn. The foot that is closest to the line is the one the athlete must touch their hand with. Moving past the cone will only leave football players with slower times. 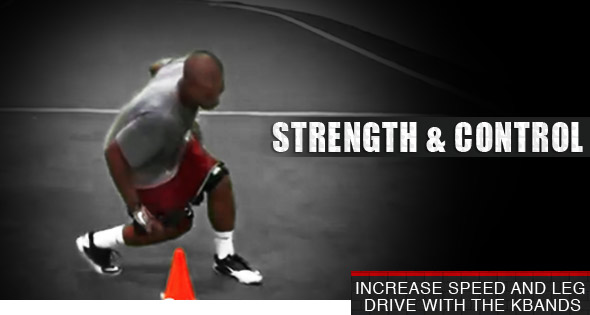 The video above shows football players an athlete training with Kbands. Kbands can help increase running speed by strengthening hip flexors, glutes, and improving hip stability. All athletes can feel immediate benefit when taking off Kbands. The muscles recruited during the use of Kbands will improve football player's ability to run faster. Kbands allow athletes to improve their strength and hip stability while training in the exact same fashion their sport requires. Building strength in the weight room is one thing, but building strength as a runner will improve athlete's football performance. The best way to train with Kbands, is to complete resisted reps followed immediately by un-resisted reps. In doing this, football players will feel a featherlike feeling in their legs. This portion of the workout is when an athlete must make sure to work at 100% intensity. This will ensure the football player will use all of the muscles recruited to train the body to work at maximal effort with all available muscles. The human body is made to adapt. Not all muscles fire it once to complete any specific movement, but by increasing the amount of resistance needed to complete a task, football players can train their bodies to perform at peak potential.

First, complete 6 to 8 resisted reps for time. It is important when doing the 3 Cone Drill football players always work to increase their time. After the 6-8 resisted reps, football players will immediately unclip the resistance and move directly into 6 to 8 additional un-resisted reps. Push the pace, and always work at maximal effort. To run faster, football player must alter their muscle fiber type. Slow twitch muscles must become fast twitch muscles. This is only done by muscle recruitment and overloading the muscles' abilities. Work at 100% intensity to increase your speed and become a better football player. Looking for a full Speed and Agility Package. Look to our Athlete Performance Pack for a set of Kbands and our full athlete training program. Build your core, speed, and agility with our full workout athlete training session.