Football players rely on speed and agility on the field, and in order to move fast, slow down, stop, and change direction quickly, a football player needs to develop strength and stability in the core. The core, a set of muscle groups surrounding the lower torso, represents the body’s center of gravity, and the force behind every motion originates here. Football players need to run and throw, actions which appear to take place in the arms and legs. But actually, both of these motions—and almost every other action vital to a football player—begin in the hips and core. A strong torso and powerful hip rotation build force and control that extend through the limbs. The condition of the core also controls speed and balance in every other area of the body, since the core helps keep the spine aligned and all motion depends on a strong and stable lower back.

The two core strength exercises in the video below are designed to support speed workouts and other football drills by building power, balance, and agility.

The first of these two core strength exercises for football players will rely on the KB Duo. Before this move begins, the straps should be tightly attached to an anchor point and adjusted so they hang just above the floor. Like the model in the video, football players can then hook one foot, the left foot, into the left loop from face-down position.

Once the left foot is secured in the strap, the football player places his weight on the palms of his hands and raises himself up as if he’s doing a push up. His weight should be centered between his arms and his left foot while his right foot stays free. He then twists his body slightly and pulls his right knee up toward the left side of his chest. He repeats this move eight times, maintaining strong pressure on the core with each repetition. After eight moves, the football player moves the strap to the other foot with his partner’s help and completes eight more reps on the other side. The second rep is followed by a quick break. 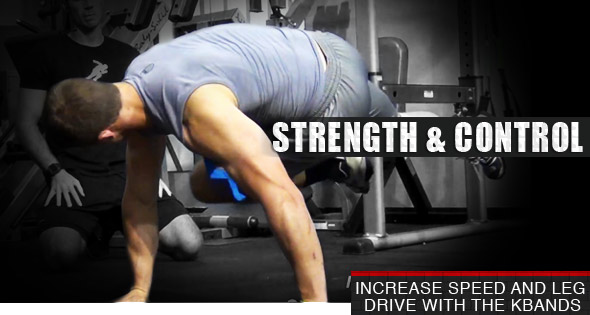 For the second exercise in this football conditioning and core strength building set, the football player places both of his feet into the straps of the KB Duo. He then supports his weight on his palms and straightens his body line so his back, rear end, and legs form a straight plank. As he works to stay balanced, flat, and under control, the football player feels the pressure of this move in his lower torso and abs. Once he’s in position, the football player lifts his knees toward his chest, one knee at a time as if he’s running in place. He starts slowly at first in order to stay balanced and in control, then he gains speed and runs steadily for 12 seconds. During the entire exercise, the football player works to make sure his body line stays flat and his rear end doesn’t rise up or sag. He follows this second move with a 30-45 second rest.

Core Strength and the Game of Football

Wide receivers build their success on speed, but regardless of their position, all football players rely on speed and agility for success. This means they need to generate explosive power while staying on control of the body’s direction and form. Speed and agility don’t come from the legs alone; they come from the hip flexors and the complex interactions of the muscles in the lower torso. Like every other form of athletic conditioning, speed and agility also rely on the body’s ability to protect, control, and support the lower spine.

Football players need a body that’s responsive as well as strong, and this type of conditioning begins on the core. A powerful core forms an anchor that can increase range of motion and improve the results of every other workout, even resistance and weight training sessions focused on the arms or legs alone. A great football coach knows that core conditioning is a lifelong process, so effective football drills that center around core strength begin in youth football and continue into pro football speed workouts and intense conditioning sessions.

No matter where a football player may be in this process or what position he may play, core strength exercises and speed workouts like these can keep the abs, hip flexors, and back muscles strong and responsive even during the off season.

Training Tools and Resources for Football Players and Football Coaches

The Kbands Training.com website provides a valuable resource for athletic training across multiple sports, including football. In addition to suspension and resistance training equipment like the Kbands, KB PowerBands, and KB Duo, the site offers access to video workout sessions that can help football players condition their bodies and sharpen their skills.

This video specifically relies on the KB Duo, a suspension training system that provides an entire gym in a few easily adjustable straps. Suspension training adds an additional element of challenge to simple body weight workouts by using biomechanical principles to build balance, endurance, and coordination as well as muscle strength. Explore the site to learn about the benefits of the KB Duo, not just for football conditioning, but also for general athletic training, weight loss, and overall health.

In addition to resistance training, suspension training, and stretching equipment, KBands Training also offers a set of Athlete Performance Packs, which are specific guided training sessions tailored for track, cheer, basketball and a wide range of other sports. The Athlete Performance Pack includes an intense five-week training program targeting speed, agility and vertical leap training for football players. Both players and football coaches can use the guidance and drills provided by the Kbands athletic training team to lead their teams to a winning season. Visit Kbands Training.com for more detail.