Lineman Drills for Strength and Explosiveness

All football players contribute to team success by being well centered and strong, especially in the upper body. But the lineman relies on strength and a low center of gravity more than most other positions. A lineman needs to stay stable in the face of opposition, which requires both strength and mass, and the best lineman drills and exercises develop both of these in equal proportion.

A lineman also needs to develop explosivity. When facing an opponent, if a lineman can keep his center of gravity low and drive the mass of his opponent up from the ground, he’ll maintain greater control over his opponent’s motion and be better able to move him to the side. When two offensive or defensive linemen meet, the one with better chances of a successful outcome will be the one who can keep his center lower and lift his opponent with a combination of speed and force.

So for a lineman, the key to success lies in three central areas: large body mass, a low center, and the ability to take on an opponent with an explosive lifting motion on impact. These three core advantages can be developed through lineman drills and power exercises that emphasize development of the upper body, balance, and controlled force in the lift. The KB PowerBands can play a central role in these drills. In the video below, the Kbands trainers demonstrate a set of lineman drills which take only minutes, but build the kind of explosive power that can lead to success on the football field. 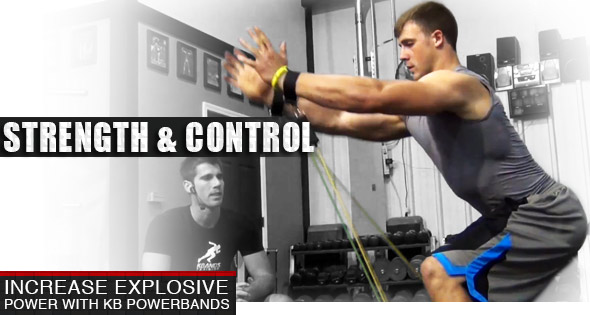 Lineman Drills with the KB PowerBands

A lineman looking to build strength and power using the Kbands resistance training equipment should first take the KB PowerBands and attach the desired level of resistance to the straps. The bands come with four colored straps at varying levels of resistance, so the lineman should choose the combination and colors that match his current ability levels. Then he should strap on the wristbands and clip the resistance bands in place.

The lineman should then place his feet on the bands, holding them to the floor like the lineman in the video. The feet should be securely on top of the bands and placed about shoulder width apart. The lineman should then crouch down so his knees are bent and his center of gravity is low, but his head should stay upright and his back should stay straight. One knee should be higher than the other, so the lineman feels as stable as possible and ready to lift an imaginary opponent with an explosive upward motion in both arms. When ready, the lineman should reach out with both arms as if driving his opponent upward. This movement should be fast, explosive and complete. The entire range of motion should bring the arms from a lowered position all the way up to shoulder level against the resistance of the bands. Then the arms should come down while staying under control. The move should be fast and should expend all of the energy in the muscles of the arms and shoulders.

A lineman should repeat this move six times as fast as possible while keeping his center of gravity low and his arms under control. Then he should take a short rest for thirty to forty five seconds before completing another six reps. Then he should take another rest break followed by a third and final set of six lifts.

Resistance Training for the Defensive Lineman

During complex moves like this one, resistance bands can serve a purpose that free weights and weight machines can’t. While strength is an important part of success for a lineman, reflexes, technique, explosivity and force are just as important and involve a wide range of training drills and flexible, multipurpose equipment.

The KB PowerBands can be positioned in a way that places focused pressure on targeted areas of the body. The bands can also be easily adjusted to a lineman’s level of strength and ability, and as his strength increases, the bands can be adjusted and resistance can be elevated. Meanwhile, moves like the one above allow the lineman to focus on body position and keeping a low center of gravity in addition to building strength and speed.

For more lineman drills and moves designed around performance goals specific to football players, especially defensive and offensive linemen, explore the KbandsTraining.com website. Coaches and players should also take a look at the Kbands Training Athlete Performance Pack, a set of drills and exercises targeted for a range of sports including basketball, cheer, and track.