Since throwing, receiving, and ball handling skills are essential to successful lacrosse training, and the muscles of the hands and arms are often neglected during drills that focus on other aspects of the game, it’s a good idea to make stick work a regular part of any training warm up session. Before launching into a practice that focuses on agility and larger plays on the field, start a regular session with a dynamic warm up, followed by a basic round of lacrosse goalie drills like the one demonstrated in this video.

This drill is not just for goalies (though all goalies should practice these basic throwing and receiving moves on a regular basis.) By pairing with a partner and completing each round of this short series, all players on the field can warm up the hands, arms and shoulders and wake up the basic hand-eye coordination that can mean the difference between catching and dropping the ball, or winning and losing a game. The most intense moments on the lacrosse field often take place within reach of the net and around the GLE (the goal line extended). So to complete this drill, players will be working within this zone and concentrating on stick handling and technique.

This drill requires only a marked field, a net, and a ball, plus standard lacrosse equipment including sticks and protective gear. Set up is minimal, but players should flex and stretch the upper and lower body before the session begins.

This drill begins with a close passing sequence that will take place within immediate distance of the net. For this phase, partners will pair up with one player blocking the net and the other standing about three to five yards away. Both players will begin passing the ball back and forth at one corner of the net and will slowly move across to the other corner while keeping the ball in motion.

Both players will work to keep their sticks high and under control. The hands should stay soft, which means with each catch, the stick should stay loose. Both hands should also stay relatively close together, not extended far from each other along the stick. Close hand position will help players stay in control of the catch and help them return the ball quickly. 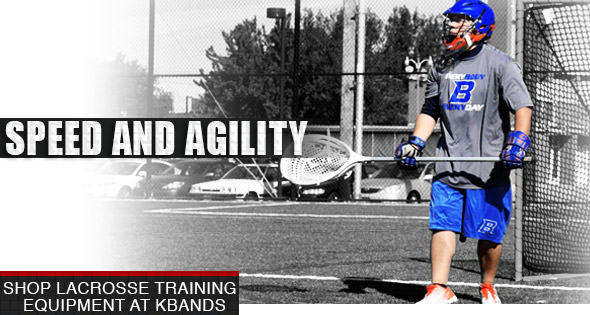 For the second phase of the drill, the first player will stay beside the cage while the second player moves ten to fifteen yards out toward the center of the field. The players will send the ball back and forth with overhand shots at this larger distance, beginning at the GLE about ten to fifteen yards out from the cage. Players will start with about eight to ten overhand shots per hand position. Again, the player close to the goal will begin in one corner and move slowly around the smaller arc while the other player covers the larger arc beyond the GLE.

The next phase of the drill will involve a low three quarter shot, or side angle shot. The players will stay at the same distance, with the first covering the goal and the second moving slowly across the field in a wide arc. But this time the passes between them will be executed from the side and at a height below the waist. The player delivering the pass will send the ball toward the goalie, who will catch it at any angle and then return it from the low three quarter position. As with the first to phases of the drill, the two players will complete about eight to ten exchanges while moving slowly from one side to the other, then eight to ten more on the way back.

As players enter into each sequence in the series, coaches should pay close attention to the form of the goal keeper. The goalie should take a step toward the shot at each round, attacking the pass as it’s delivered, anticipating the direction of the shot, and aggressively cradling the ball as it arrives. In order to execute this move with confidence, the hands should stay close together and the wrists should stay flexible so the stick can be turned quickly in any direction.

During the last passing and shooting sequence in this blocking drill, players will stay at the same distance and execute the same number of passes around the arc at the same speed. The athlete in the field will send the shot toward the goalie from the low three quarter position as before. But this time, the delivery of the shot will stay low, and the shooter will aim for the goalie’s feet. This will challenge the goalie to go low in order to block the shot. This may also require the goals keeper to move forward aggressively and rotate quickly from high to low stick position.

As before, the entire arc should include eight to ten shots in one direction and eight to ten more moving back in the other direction. Players and coaches should keep this blocking warm up nice and simple, completing the reps at a reasonable pace while concentrating on form and body position. Goalies should work close to the corners of the net and should focus on hand position during both high and low shots.

For a wide range of lacrosse drills for both beginner and advanced players, athletes and coaches can visit the lacrosse section of Kbands Training.com. The section offers a growing list of training sequences, warm up drills, resistance exercises with the Kbands training equipment, and simple offensive and defensive practice moves that players can complete on their own or with a team.  Most of the drills require minimal equipment and set up and can be easily worked into a regular seasonal program. For more information and answers to specific questions, reach out to the experts at Kbands Training.com.