Basketball players rely on quick feet and powerful agility for direction changes on the court, and basketball lateral speed drill like these can support a quick getaway after a steal. These exercises work well as basketball defensive drills, but they can help players develop offensive skills as well, since they build sharp reflexes, passing strength, and quickness.

Basketball players and coaches can follow along with the attached video as Trevor Thesimann takes viewers through a series of simple but effective basketball lateral speed drills with the support of the Kbands resistance training equipment. With the Kband straps in place around the upper legs and the resistance bands attached to the straps, athletes will feel an additional tension on the core, upper legs and glutes as they move across the court. This added tension will help athletes develop the knee drive and speed they need to cover ground quickly and execute sharp moves and direction changes.

This set of basketball defensive drills will require a minimal amount of equipment and can be set up in seconds. Coaches will need a ball, three agility cones and a set of Kbands resistance bands for each player. (Purchasing information for the Kbands and the cones can be found at here at www.KbandsTraining.com).

As players attach the Kband straps and clip the resistance bands to the metal rings, coaches can lay down the agility cone in a line about three to five feet apart. Players will begin by standing in a defensive position behind the center cone, facing a coach or partner who will move with them up and down the line of cones as the drill progresses.

Throughout the entire series from the left cone to the right and back, the player will stay in a low, defensive stance facing the coach. Beginning players will complete the move back and forth down the line for three to five reps, focusing primarily on lateral agility and passing speed. As players become more advanced, they can use this as a conditioning drill and start emphasizing strength in the core and hip flexors. At this point, players and coaches can expand to about six to eight reps.

During the more advanced version of the drill, after the player moves up and down the line completing the established set of reps, she’ll grab the final pass and break away, dribbling the ball in a straightaway down the court. 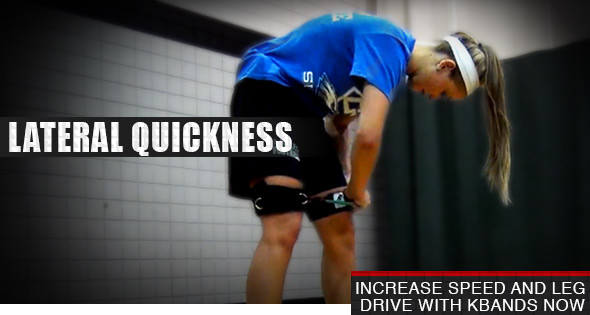 As players work their way from one end of the line of cones to the other, they should be feeling and working against the resistance of the bands. At all times, the player should work to maintain a low, stable stance and wide feet. If the feet interfere, or click, during the lateral stride, this means the body isn’t low enough and the feet aren’t wide enough to react quickly when an offensive player makes a counter move. Coaches can keep an eye on the player’s stance as she completes the drill and offer pointers on foot position. Coaches can also encourage players to keep working against the resistance of the bands and not allow the bands to control the player’s lateral stride.

Basketball Lateral Speed Drill: Advancing to the Next Level

When players are ready to take the drill to the next level, they’ll add a breakaway component to the last step. The athlete will move up and down the line for six to eight reps, and at the final rep, she’ll take the pass, reverse the pattern, and dribble the ball up the court in a sprint. During this final steal and breakaway, players need to focus on knee drive, speed, and ball control. Athletes should keep the stride width wide and work against the tension of the bands.

Explosivity will be an important component of both aspects of the drill—the lateral shuffle between the three cones, and also the breakaway. Since players should ideally stay as explosive during last rep as they were at the first, it’s a good idea to leave at least 45 seconds to a full minute rest period between each set.

After several sets with the resistance bands in place, players can unclip the resistance bands from the metal rings and complete two more sets without the added resistance of the Kbands. For the duration of these two final sets, players will feel a temporary neurological sensation of lightness, which can help as they work to develop speed and agility during the direction changes. Explosivity will be a key component of both the resisted and the unresisted portion of the drill. During both components, coaches can observe players and offer targeted pointers on stance, explosivity, passing control, and lateral footwork.

After working this drill into a regular on or off season workout routine, players should begin to see improvements in speed, agility, and confidence during the steal. For more basketball defensive drills and offensive drills like this one, basketball players and coaches can visit the basketball training section. The site offers technique, performance, and strength training tips that can help players develop their skills during every aspect of the game.

The site also offers additional information on the benefits of training with resistance and suspension workout gear. Find out more about the lightweight, portable easy-to-use Kbands, KB Powerbands, and KB Duo, and get ready to take your athletic training program to the next level.