During an intense burst of activity on the basketball court, the teams that will come out ahead and the athletes that will gain the advantage will be those who can maintain both speed and stability. Rapid direction changes on the court can cause athletes to slow down, and when this happens, opportunities can be lost and momentum can shift to the other team. In order to keep moving at maximum speed and maintain control over the game, athletes need to build muscle strength in the hips and core, but they also need the develop the balance and reflexes they need to steady during the transition from each direction the next. The right set of youth speed drills can support this goal.

Youth athletes need stability and agility as much as older players do, and this is an excellent time to develop the muscle strength, game skills and athleticism that will stay with young players as their adult bodies develop. With that in mind, the attached video presents the Youth Four Square Box Drill, a simple but intense and effective basketball for drill for kids, and one of several kids basketball drills on the KbandsTraining website.

This youth speed drill can be worked into any training program for athletes at all skill levels, but it is especially useful for younger players who need to work on fast turns and shifts between the backpedal, the straightforward sprint, and the lateral sprint.

The Youth Four Square Box Drill will require a set of Speed and Agility Cones and a set of Kbands for each participant. The cones can be placed in a wide square, with the distance between them varying based on the age and experience of the athletes. Older players can keep the cones about 12 to 16 feet apart, while younger athletes can keep them close at about 6 to 8 feet.

When the cones are in place and all participants have attached the Kbands around their upper legs, the drill can begin with the first sequence, which involves a patter step. For this move, each athlete will begin at the first cone and then sprint in a linear fashion to the next in the series, and then the next in order around the square. At each cone, the athlete will approach with a quick patter step, then burst back into full sprint speed. Coaches should remind athletes not to lazily round each cone like the bases of a baseball diamond, but instead to stay aggressive on the approach and keep as close to the cones as possible at every turn. The tighter the turns, the more benefits each athlete will gain from this drill.

The second phase of this youth sprint drill will also involve forward, linear sprints, but in this sequence, players will tighten each turn by running in an X shaped pattern. Turns will take place on a 45 degree angle instead of 90. Players will start at the first cone, run to the second, then cut across the square at an angle. Again, all athletes should stay as close to the cone and as tight on each turn as possible in order to gain the maximum benefits of the drill.

During the third phase of this youth speed drill, athletes will start at the first cone and complete a straightforward sprint to the second. Then they will backpedal back to the first. This will be followed by a sprint to the second, a backpedal to the start, and then a lateral run to the fourth cone. This will give athletes a chance to work on lateral and backpedaling agility as well as linear sprints.

The fourth sequence of this youth speed drill will have athletes moving around the cones one at a time, beginning with a straightforward sprint from the first to the second, then a lateral sprint to the third, then a backpedal to the fourth. During this sequence, as with every similar sequence in ids basketball drills, coaches and athletes should focus on correct body position. For example, the chest should stay forward and elevated at every sprint; if athletes let the upper body rise during the backpedals, they will have a harder time staying in control of stops and direction changes. 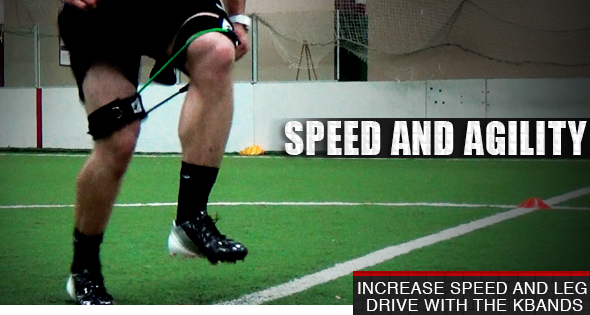 Every athlete should work through the entire series of this youth speed drill with the Kbands in place for four to six sets. Keep in mind that larger groups may benefit by dividing up into pairs or small teams and using multiple squares at the same time. This can keep the drill in motion and diminish waiting periods. After every player has completed the sequence four to six times, the Kbands can be removed from the legs and each athlete can complete the series two more times with no resistance in place.

Since athletes will feel lighter during this final phase, they can use this temporary sensation to get more out of each sprint. Coaches should encourage them to move faster at each start, stay closer to the cones, and concentrate on maintaining agility, speed and body position. Athletes should be careful not to lean too far with the forward foot at each cone, which can slow them down.

For more youth speed drills, agility drills, or basketball drills for kids that emphasize speed and balance, coaches and athletes can explore the training resources on KbandsTraining.com. The site also offers basketball specific drills that cover every aspect of the game for players at all levels, including shooting, passing, scoring, and offensive and defensive maneuvering.

The site offers a growing library of basketball drill for kids and adults that can take any team to the next level. Visit the site and starting developing your training program today.