To position oneself in the athletic position, athletes will stand with their feet slightly wider than shoulder width apart, knees slightly bent, and knees lined up behind the toes. Weight should be felt in the heels. Knees, hips, and ankles should stay aligned at the onset of the position. Arms are flexed at the elbows and athletes are prepared to attack a ground ball or react quickly to snag a line drive.

Athletes are taking advantage of their bodies’ natural ability to produce greater power through the stretch shortening cycle by positioning the body this way. Simply put the stretch shortening cycle allows the muscles to stretch, store energy, and release this energy to help athletes produce greater power. Notice the difference between power and strength. The athletic stance will help athletes quickly jump up to snag an errant throw but will not necessarily help increase slower strength movements.

By utilizing the athletic stance during indoor baseball drills, such as the RSC Fast Hands Drill, athletes will be able to optimize their training and experience increases in quickness and control in their upper and lower body lateral movements.

To execute the indoor baseball drill athletes will need:

Baseball players will place the Speed and Agility Cones 8-12 ft. apart. One partner will place the Reactive Stretch Cord Anchor Strap around one wrist and stand 2-3 ft. to the side of one of the Speed and Agility Cones. The other athlete will place the 360 D-Ring on the side of the anchor, place a glove on their hand, and assume a good fielding position (athletic stance). The partner not attached to the Reactive Stretch Cord will stand in front of the cones with 2-3 baseballs.

To perform the RSC Fast Hands Drill the baseball player with their glove on will start at one Speed and Agility Cone and begin to shuffle laterally toward the opposite Speed and Agility Cone. During the indoor baseball drill it is important that athletes keep their hips and shoulders square in front of them as they move laterally through the RSC Fast Hands Drill. As the athlete approaches the opposite Speed and Agility Cone the partner holding the baseballs will begin to throw ground balls to the athlete moving laterally. Athletes moving laterally will field and flip the baseball back as quickly as possible. It is important baseball players return the ball as quickly as possible during the indoor baseball drill. 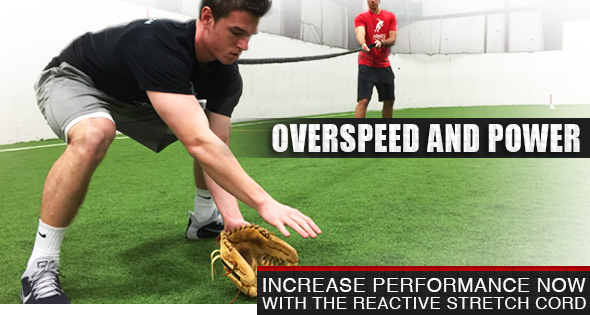 Plyometrics help to enhance the power of athletes by maximizing force and speed. During a plyometric exercise the body is able to store extra energy within the tendons by stretching them, much like a rubber band is stretched. When the tendon is released, so is its energy. The release of this energy will greatly enhance the effectiveness that training has on real sport situations. However, if the exercise is not executed quickly the energy is lost as heat. This is why plyometrics must always be performed at high rates of speed.

Although plyometric exercises are primarily associated with creating more explosive power in the lower body, this indoor baseball drill can be utilized to achieve the same goal in the upper body as well. By consciously thinking about quickly returning the ball, baseball players will train the body and mind to move quicker by developing fast twitch muscles and creating more neurological connections while performing the RSC Fast Hands Drill. Using this indoor baseball training drill to develop these baseball skills allows the athlete to make quicker double plays and quicker throws across the baseball diamond.

Developing Stability and Power Through Lateral Resistance and Assistance

By utilizing the Reactive Stretch Cord to provide both assistance and resistance during the indoor baseball drill athletes will achieve outside stimuli to help develop greater speed and body control while moving laterally. Mimicking game like situations is an excellent way to challenge the body and practice performing regular game like movements in a more challenging environment. Athletes must maintain good body control and positioning during the indoor baseball drill while working with and against the resistance being applied by the Reactive Stretch Cord.