Stick skills are an essential element of lacrosse training for players of every age and skill level, so at least a few minutes of every workout and practice session should be focused on stick work. These sessions should emphasize hand grip, cradling, arm position, basic technique, and of course sending and receiving passes while on the move.

In the game of lacrosse, passing skill development comes from proper technique and hand-eye coordination, which both require plenty of practice. But sending and receiving a well-executed pass will also require a sense of rhythm, timing and teamwork. Drills like the this one—the lacrosse rhythm passing drill—can help teams work together to stay connected and focused while simultaneously delivering and receiving passes at a run.

The video below will help players and coaches understand what this drill looks during execution. This exercise doesn’t require extensive equipment, but the layout of the field and the coordinated motion of each player will add to the challenge of the drill and make the entire process more effective. If players can move fast while still staying in control of each pass, the drill will have the greatest level of impact.

This exercise will require a standard set of lacrosse equipment for each player, including sticks and protective gear. The drill will also make use of five agility cones, which can be purchased at KbandsTraining.com.

The first cone will be placed in the center of the field, and the other four will be arranged in a square with the first cone at the center and the others placed around it at a distance of about six to ten yards. Beginning players can move the cones closer to the center, and more advanced athletes who need greater passing challenges can enlarge the square and place the cones farther away. Players will begin the drill by gathering in a loose group at the center cone with sticks held in passing position.

As the drill begins, one athlete will run from the center cone to the one of the cones placed in the surrounding square. This player will be cradling the ball and keeping an eye out for another teammate who will be running toward the next nearest cone. The athlete with the ball will pass to the second player, who will receive the pass, cradle the ball, and turn toward the next athlete, who will be running toward the third cone in the square.

As the third athlete reaches the third cone, that athlete will receive the pass and turn toward the fourth athlete, who will be running toward the fourth cone, and so on. Again, to gain a sense of what this motion looks like, players and coaches can observe the athletes in the demonstration video.

The key to the success of this drill will be timing. After delivering the pass to the next teammate in the square formation, each player will drift back toward the center cone. While moving back toward the center, the player will keep a close eye on the motion of the ball around the square. Eventually the ball will make its way all the way around, and the player will run out to the distant cone once again to receive the pass and send it onward. Athletes should time the cuts carefully so they can be at the cone and in position to receive each pass as it’s delivered. 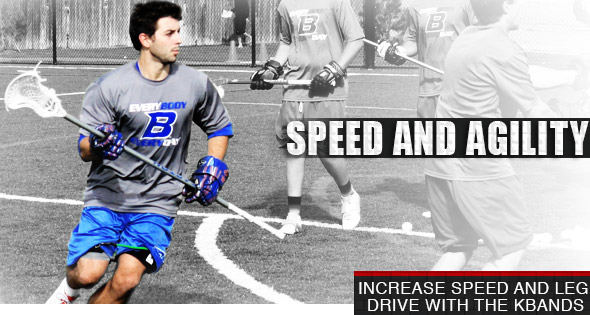 For timing, rhythm, and accuracy during this drill, players should keep the arms in a relaxed position extended away from the body. An extended position can increase response times and help players turn the pass around quickly. As always, the stick should be held high in the palm of the hand, close to the fingers rather than the wrist. This improves control and coordination and can speed the execution of the move.

As players build speed and skill, this drill can be modified and players can leave the center cone and wait for the pass while staying in position at the outer edges of the square. Again, as the ball moves around the square, each athlete will anticipate the pass, catch the ball, roll out around the cone, and send the pass to the next player.

While lacrosse players work on developing passing skill, there will be no need for resisted reps with the tension of the Kbands targeting the legs and core. During this drill, players should focus their attention on coordinated passing and proper positioning in the hands and arms. At the same time, this drill will bring maximum benefits if players move explosively across the field and visualize game like situations. Teams should concentrate on the passing aspects of the drill, but they should pay attention to agility and sprint speed as well.

As lacrosse players work together as a team to execute this drill, they should keep an eye on the location of the ball at all times, and they should also pay close attention to the technique and position of their teammates. Athletes should not just accept the pass, send it on, and then tune out until their next turn. A successful lacrosse game depends on coordinated behavior on the field and shared investment in the outcome drills and practice sessions like this one.

For more lacrosse passing and stick work-drills—both team drills and exercises that can be completed by individual players—athletes and coaches can explore the lacrosse training section of KbandsTraining.com. The site offers a growing list of drills that help players improve their speed, core strength and agility as well as upper body control and coordination.  The site also provides drills that target a wide range of other sports, and purchasing information for training aids and resistance equipment including the Kbands, KB Duo, and KB Powerbands.