Why Do Defensive Backs Need Special Speed And Agility Training?

Football is a game which has team work and superior athletic skills as its core premise. All the football players in a team play at different positions and need to have different levels of skills to bring the best of the team, in terms of performance, on the field. Players who play as defensive backs inarguably need to have the maximum agility, speed and the ability to transition quickly in circular speeds. For this reason, whenever most defensive back players practice on or off the field, their focus is to improve their speed and agility and their circular speed. In addition to the speed, the footwork also needs to be completely precise and fast so that the opponent does not have the time to make game- changing maneuvers.

All these traits in a defensive back player can be achieved and worked upon by practicing a modified L-Drill using a Kbands Reactive Stretch Cord with the help of a partner. Resisted acceleration training, in combination with unresisted sets can greatly help a defensive back in improving the speed and the footwork.

How To Perform A Modified L-Drill For Defensive Back Players?

The modified L-Drill is set with the cones at a distance of 5 yards from each other. The modified L-Drill is performed using a Kbands Reactive Stretch Cord. To provide room for movement and acceleration, the cord has 360 D-Ring attached on to the waist of the athlete performing the drill. The drill starts with the partners working on the inside of the L. At the start of the drills the partners have to be at the top side and will begin to run to improve the turning circular speed. The athlete would accelerate towards the end of the ‘L’. Thereafter the athlete should shuffle along the length with as much explosiveness as he can. While performing this half of the L-Drill, you will notice that the 360 D-Ring which is attached to the Kbands Reactive Stretch Cord has come to the front. This position of the D-Ring is ideal to get the athlete to accelerate through the distance of 10 – 15 yards. This drill can help the defensive back to get in his element, working on his turning speed acceleration as well as transitioning from sliding side to side. The drill is performed as a whole set with 8- 10 reps of the resisted steps of the drill which are followed by 2- 3 reps of the drill with no resistance. This helps in the muscles to get more activation and help in increasing responsiveness of your muscles.

Important Points To Remember While Performing A Modified L-Drill

As much as Kbands Reactive Stretch Cord can benefit an athlete in improving various aspects of performance, if proper precautions are not taken it can cause unnecessary injuries and pain to the athlete. A very important point to remember is to never pull the cord whenever it is not required. Whenever the athlete is shuffling during the drill, the cord should not be pulled during the entire time. Unrequited resistance or assistance should not be given to the athlete. Doing so will not help the athlete in any way and may even cause muscle pull and sprains. As the athlete is sprinting, the partner should never pull the athlete who is performing the drill, off the line as he is sprinting or if he is waiting for the linear sprint out while trying to mimic an interception or a tackle up field.

The partners should work in a coordinated manner so that the position of the Kbands Reactive Stretch Cord and the 360 D-Ring is always in the correct position. While providing acceleration to the athlete performing the L-Drill, the pull should be of just the correct strength and should not be too much otherwise it can cause sprain in the athlete’s back. Correct posture and body movements are necessary to maximize the output of any drill that is performed with the Kbands Reactive Stretch Cord. 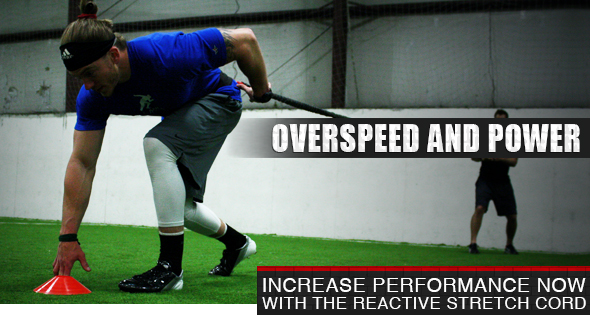 What Are The Advantages Of Performing A Modified L-Drill For Defensive Back Players?

Defensive back players constantly need to work on their circular acceleration and speed while maintaining their levels of stamina and speed. A modified L-Drill performed using a Kbands Reactive Stretch Cord can help an athlete to achieve the same without any compromise in agility. All the L-Drills, whether basic or modified, help the athletes in achieving never before levels of agility and stamina. Modified L-Drill has many loyalists who can vouch for the benefits the drill has given them. The controlled resistance, which is provided while performing the modified L-Drill with a partner helps in improving the transitioning reflexes as well as on- field sprint. Resisted training has been proven to increase the muscle development and responsiveness which help the athlete greatly with his on field performance. While performing the modified L-Drill with a Kbands Reactive Stretch Cord, an athlete has to go through partner controlled resistance and that helps immensely in a team sport like football where as much as individual performance, coordination amongst the team members is also vital.